A brawl that broke out at the Minnesota State Fair on Saturday and the police response that followed led to a mass crowd panic and exodus, as well as an early closure of the fairgrounds.

The fight occurred at Cafe Caribe in the Midway section of the fairgrounds and resulted in police quickly moving to end it and using pepper spray, witnesses told FOX 9.

"A fog overtook the intersection and you could hear echoes of people coughing and gagging, everyone was covering their nose and mouth with their shirts and sweatshirts." Jo said. 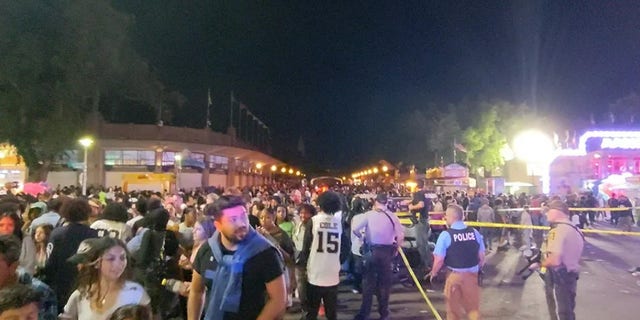 "There was a shift, people were running away, and then people just started booking out of there. It all happened so quick … all I knew is that I just wanted to get away from there," she continued.

Witnesses said they had heard gunfire at the fair, although the Minnesota State Fair Police Department has not confirmed any details of the incident.

The State Fair said in a statement shortly before 11 p.m. that the fairgrounds "began closing early this evening at approximately 10:20 p.m. due to disturbances in the area of the Midway. There is nothing more to confirm at this time."

A fight involving multiple people at Cafe Caribe in the Midway section of the fairgrounds resulted in police moving to end it and using an eye irritant, witnesses said. (Fox 9)

Minnesota Governor Tim Walz, a Democrat, thanked law enforcement for their response to the disruption.

"Grateful for the coordinated law enforcement presence at the State Fair," Walz wrote in a tweet. "Officers are working quickly to usher folks off the fairgrounds and respond to reports of violence in the Midway area. We’re monitoring the situation and working quickly to restore order."

Last weekend, the state fair was forced to shut down rides and cancel a concert after strong storms knocked down trees and caused power outages across the Minneapolis area.

Other states have also experienced chaos at their fairs recently.

A fight broke out at the Western Idaho Fair on August 26, resulting in one person getting stabbed and another suffering an accidental self-inflicted gunshot wound.

That same night, a shooting at a county fair in Fayetteville, Arkansas, left one person injured. The suspect had also fled the scene but has since been taken into custody.

How many of these dishes will you try on a visit to the Texas State Fair this year?
Categories: National News, News
Comments
Leave A Comment
Is It Legal To Warm Up Your Car On Cold Mornings In Louisiana?
Studies Show Louisiana School Uniforms Don’t Improve Behavior
Bossier Police Say Viral “Abduction” At WalMart Didn’t Happen
Shreveport’s Bridge of Lights Gets The Mardi Gras Treatment
Shreveport Plumbing Employee Arrested For Stealing From Company
School Closings For February 1st, 2023 In The Shreveport Area
Former Bossier Middle Schooler Set To Play In Super Bowl
These Teens Have Disappeared In Louisiana Since The Start Of 2023
Ark-La-Tex Players Preparing For 2023 NFL Championship Weekend